skip to main | skip to sidebar

Okay. SO I feel awful that I haven't updated this yet but I somehow managed to forget my computer cord adapter and am unable to get the pictures I have taken onto the blog. But I have decided to just talk a little bit about what I've seen and don so here we go!

The night before I left, mom and I spent the night in a hotel about ten minutes from Cincinatti airport and spent the time watching ridiculous Japanese gameshows such as Binocular Socker, Human Tetris, and that crazy show where they try to get a marshmallow with their face held back by a rubber band. It was a pretty good last night in the states :)

The plane flights were pretty uneventful. Very slight turbulence every now and again but nothing too bad. Except I couldn't sleep. But there were plenty of movies and such to keep me occupied as we flew north. The plane went up to the top of Canada and Alaska and then Russia where we started to go south. The plane had a neat map that said where we were and how fast/high/cold it was. The most amazing part of the trip was the flight from Tokyo to Kyoto. As we were leaving, the people who work on the runway all lined up and waved and bowed to the plane. I waved back and they all bowed at once so that made me feel pretty special ;)

the flight itself was absolutely gorgeous. The pictures are on my facebook account, but there is no way that they could capture how amazing it was to see the clouds around mount Fuji just before sunset. Also I got some amazing glimpses of the mountains and hills, and landing at Kansai International Airport just after dusk was beautiful. The lights in Osaka were twinkling and the water in the bay had mist creeping over it. Stunning.

The night in the airport was, again, uneventful. Pretty boring actually :) I spent the time surfing the net and taking random pictures of stuff. At one point I was trying to sleep and a group of Japanese teens came over and sat on another bench in the area. They were laughing (at us sleeping gaijin probably), and I'm fairly certain they took a picture.

Hiya!!
This blog is going to be a place where I can document my upcoming trip to Japan where I will be studying abroad for a year come August 28th! More will come later!
Let the countdown begin...
Posted by Aelfwine89 at 2:29 PM No comments: 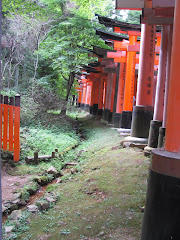 Aelfwine89
Hirakata, Kansai, Japan
I'm an East Asian Studies Major with a minor in French Horn Performance. I may very well end up living in a box, but that doesn't really bother me :)

Where Am I Today?